This modern world has not turned out to be the gauzy utopia we were once promised, and David Kramer is here to tell us all about it. The paintings of David Kramer are full of self-deprecating humor, irony and witticisms that question the conceits of adulthood and the artist’s own place within it. Through a combination of text and image, Kramer melds nostalgia with disillusionment.

David Kramer consistently wrestles with the unfulfilled promises that emerged from his 1970s childhood. Whether in old magazine ads then, or an unending feed on our smartphones now, fantasy has consistently been distorted, and reality undersold as a disappointment. A central component of David Kramer’s newest body of work is a collection of sunset images culled from the Instagram accounts of strangers. Like much that is found on social media, the original photos share a vapid sense of “curated” sameness. However, Kramer has imbued each image with thoughts that range from blunt honesty (“This is totally a vanity project”) to the more ambiguous, (“...Doesn’t get better.”), where it is hard to discern optimism from pessimism. The repetition and grid installation format of the sunsets serve as a subtle tip of the hat to Andy Warhol’s Sunset commission for the Marquette Hotel in 1972. A series of 632 unique variations of the same image, the series perfectly combined Warhol’s assembly-line aesthetic, business acumen and the impersonality of art as commodity. In Kramer’s hands, the sunsets become sly indications of our own self-commodification through social media, and the rise of the Disingenuous Inspirationalist.

In other works, Kramer turns his critique inward. To begin these pieces, Kramer writes text or one liners, and uses overall, “painterly”  gestures that start to galvanize the process. In the corners he writes his comments or opposing views that were generated through the process of resolving the paintings. Often these comments (“Sorry.Not Sorry”) become the defacto title for a painting. Somehow, the sidebar commentary takes over, and casts a bigger shadow than the slowly crafted central text. This counteraction creates an ironic moment that forever leaves a stain on the perception of the piece.

At times, Kramer attempts to reconcile our current state of affairs, remembering his mother telling him that it is not “the end of the world.” At other times he acknowledges his own role in his struggle, in thoughts such as “I am my own worst enemy” and “I have nostalgia for things I have probably never known.” Though he often finds himself adrift in a sea of self-criticisms, at times Kramer demurs to the potential of a brighter future (” I am hopelessly optimistic”). The battle between expectation and reality is at the heart of many of these musings.

In addition to paintings, David Kramer recently began a series of text / image hook rugs. Another nod to his childhood of the 1970s, the hook rug (like the shag carpets and earth tones of that decade) holds a special place in the artist’s heart. It bridges the gap between the world of Dewars whisky and Kent cigarette ads to the moral and intellectual failings of our current political and cultural establishments. These days, as Kramer says via hooked yarn on burlap: “The Circus Is Running The Circus.” Also included in the exhibition are a series of new prints Owen James Gallery recently published with Kramer, such as “Clown”, where a boozy jester is honored by his peers as a true “Clown’s Clown.” The hand-colored lithographs reflect the sketchiness and blank backgrounds of Kramer’s graphite drawings, and add another layer to the interactive process of his text and image combinations.

David Kramer’s humor is a balm to the stress of life’s often cruel dichotomies: the past vs. the present, hope vs. despair, progress vs. stagnation. Certainly, his insights make him a man for our time, a real artist’s Artist. 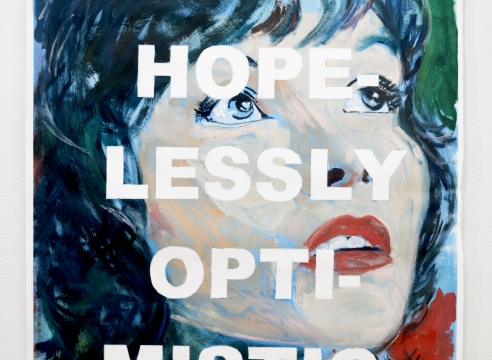 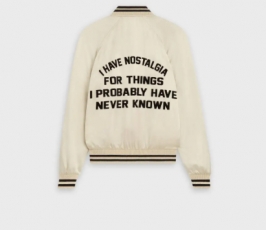 David Kramer in The Week magazine

Felix Bischof talks with David Kramer about his artwork, his collaboration with Hedi Slimane for Celine, and his recent exhibition with Owen James Gallery.