Jeff Schwarz primarily works with ceramics. However, his practice as an artist encompasses a broader sense of materials, of space and of influences. It is better, perhaps, to think of Schwarz as a painter who works with three dimensionality through ceramics.

Presented here are two of the artist’s recent series: Tiles and Stacks. Both series are grounded in Schwarz’s interest in the autonomous, stimulating marks and texts that are found in many urban environments, namely graffiti, and the many-layered, time-eroded visual detritus one encounters on storefront roll-covers, alley walls, and the occasional NYC bathroom wall.

The Stacks series use hollow cylindrical shapes as a neutral matrix upon which Schwarz can apply a series of gestural marks. These are made with his own mixed glazes, sprayed and splattered on the clay, layer over linear layer. These forms move up and down and around the Stack. The glaze lines pull the viewer around the work, while the shape of the vessel bends the light and shadows that touch it. Through this experience the artist achieves two things: the work leaves the realm of “ceramics”, as functionality, and even the nature of clay, are overpowered by the palette and energy of Schwarz's urban references. At the same time, we engage painting as an object with weight, and girth, something commanding its space in a room. These are totems of visual expression, something we must not just look at, but look around, and over, and even into. In addition to his inspired use of glaze mixing and application, Schwarz at times includes materials such as flocking or silverleaf.

The Tiles differ from the Stacks in several ways. Firstly, as wall-mounted works, they are not meant to be walked around. Rather, they contain a stratification we are meant to dig into. They also include the use of prefabricated commercial ceramic tiles. Many of these are similar to what you might see on a bathroom floor, or wall. Here, we focus less on their original functionality, and more on the geometric patterns of their shapes, edges, and the colored grout that binds them. The Tile works still include the graffiti inspired glazed forms, but instead of inhabiting the surface, they are now subterranean. The clean industrial tiles hover above the sporadic painting below. There are occasional gaps throughout the surface that allow us to peer inside, where both light and shadow alternately block and reveal the lower layers. This is a strangely compelling duality: partly antiseptic and partly dystopian, where the clean neutral surface is broken through to expose the dynamic inner-world. And yet, both surface and interior do not fight each other, they are equal parts of a greater whole, a beautifully balanced chaos. 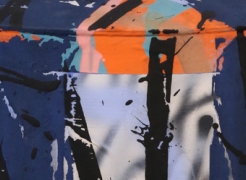