Painter Karen Marston is known for her dramatic images that portray the unbridaled, awesome power of Mother Nature. These varying force majeure, such as hurricanes or volcanic eruptions, show the dynamism embedded within the planet itself. In this third solo exhibition with the gallery, Marston has focused on forest fires. Fire holds a particular place in human imagination and advancement. It is at the heart of myths and deities in every culture throughout history, from Gabil to Ra, from Brigit of the Celts to Hephaistos of the Greeks. Fire both destroys and helps create, which has led fire gods to also become associated with The Arts.

Looking at these images, one is immediately reminded of the ravaging devastation that fires brought to the Western United States over the last several years. Many of the images are based on photographs of some of the largest infernos of 2020. Originally from California, the threat and destruction of the forest fires is a personal one for the artist. As in all her images, there is very little trace of humanity left in these paintings. There is a glimpse of a burning electrical tower’s silhouette in one, a section of paved road in another. Marston’s subject is Nature itself, but also how humans affect it. In these images, fire moves in mysterious ways, glowing and growing with intense brilliance. At times, individual flames dance flagrantly. At other times, the artist has zoomed out, so that the smoke and haze blot out much of the action, but not the drama.

The year 2020 brought to California the first “gigafire”, which is a single fire that burns over 1 million acres. This, the August Complex Fire, was only one of 9,639 fires in the State last year, which burned a total of over 4 Million acres, costing $2.059 Billion Dollars (source: Wikipedia). This is a dangerous time, and we stand on the precipice of a point of no return. While the threat to our climate has been dire for quite some time, the callousness of the recent U.S. Administration has only made matters worse. Whether it is the opening of Federal Lands to oil companies, or pulling out of international climate treaties, our government has only poured fuel on to the fire. Karen Marston’s paintings call out for action and remediation. Hopefully through sustained awareness a conversation about real solutions can begin. 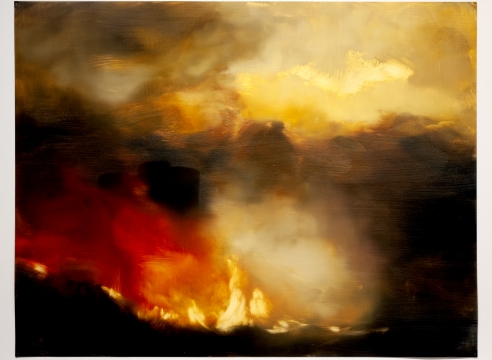