Owen James Gallery is pleased to announce the opening of “Walter Robinson: Stencils From the ‘80s”, an exhibition presented exclusively online.

Walter Robinson is an omnipresent art world luminary, active in New York City since the 1970s. A prolific force, he is known as a member of the Pictures Generation of artists, the Colab art group, a co-founder of Printed Matter and an influential art critic.

His output over the years has been expansive, spreading through a number of series such as the Romance Covers, still life depictions of beer and medicine bottles, and adaptations of Normcore fashion adverts. At the heart of this diverse array is a cataloging of the symbols of desire, a black comedy feeding mass-market appetites.

It is interesting to note that the stencil prints Robinson produced in the early 1980s are such a small portion of his work overall. However, they capture a particular moment in time, as they combine Robinson’s use of commercial imagery with the aggressive and immediate style that would become a hallmark of the early ‘80s art scene.

Robinson’s stencil series began as contributions to Colab’s annual holiday store, where affordable prints and multiples were sold to help fund the group’s intrepid efforts. While these prints are indeed limited editions, Robinson has used the application of the spray paint in slightly different ways, so that each one is a unique variation of itself.

The symbols they depict are classic Walter Robinson: the Noir-ish tough guy, the femme fatal, the romantic lovers. They all tap into the darker undercurrents of modern American life, all that is bland, cheap, jingoistic and ultimately unfulfilling. Like the edges of the stencils used to make them, the images are harsh and stark, but also vibrant and captivating.

The exhibition can be viewed on the gallery’s website as well as our gallery page on Artsy.net. 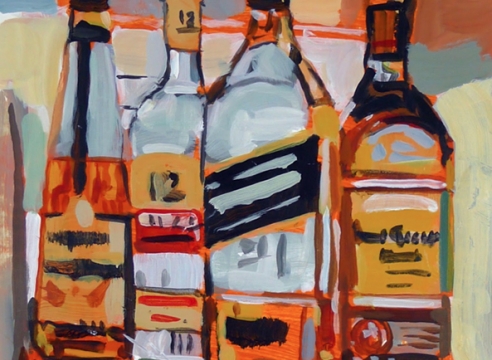